JACKSON, Miss — This state’s capital city is an unusual location for a seven-course tasting-menu restaurant. So much so that Zacchaeus Golden made the news when he opened one called Southern Soigné in December. But it turns out he wasn’t such an outlier.

Mr. Golden is among a growing, nationwide cohort of chefs who have embraced tasting menus while rejecting the most grandiose conventions of the tradition. They are mostly young, first-time restaurateurs who are attracted to a format they say unlocks creativity and cost savings. Their restaurants are nimble, lower-cost affairs, and they’re not catering to globe-trotting millionaires.

You could say these chefs are saving from itself a dining style so synonymous with pretension and excess it inspired a horror movie (“The Menu,” due out in November). But their goals are more personal than that.

Somewhat unexpectedly, what Mr. Golden calls the “higher style of dining” was the most direct route he knew to becoming his own boss. “I just wanted to cook some good food, man,” he said. 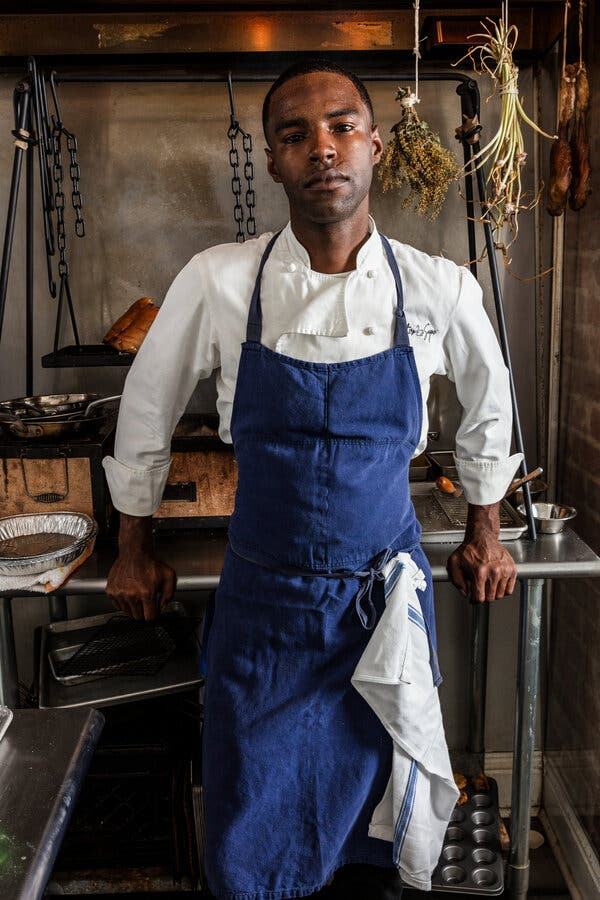 Zacchaeus Golden converted the kitchen of a mid-19th-century Victorian cottage for Southern Soigné, his tasting-menu restaurant in Jackson, Miss.Credit…Cedric Angeles for The New York Times

What the new generation of tasting-menu restaurants lack in luxury trappings they make up for with nervy imagination conveyed by deeply personal food, bohemian charisma and business models that challenge assumptions about what restaurants should provide customers and employees.

These restaurants have gone from micro-niche to emerging movement since the start of the pandemic, as hospitality professionals were forced to be resourceful to make ends meet.

“Covid changed things,” Mr. Golden said. “I didn’t go through all that just to go back to cooking someone else’s food.”

Twelve courses from a recent menu at Southern Soigné.Credit…Cedric Angeles for The New York Times

A native of the Mississippi Delta, he worked in the kitchens of influential tasting-menu establishments like the French Laundry, in Napa Valley, and the Inn at Little Washington, in rural Virginia — restaurants where dinner for two can easily surpass $1,000. Southern Soigné shares culinary ambition with such dens of conspicuous consumption: Mr. Golden plates food with tweezers, and on any given night his mise en place could include tomato powder or cured egg yolks.

The similarities end there.

At $95, Soigné’s fixed-price menu is a fraction of the cost of lavish tasting-menu marathons, and the restaurant itself is a sharp departure from the chandeliered opulence or austere modernism long associated with the genre. (There is also a three-course option for $65.) Built inside a mid-19th-century Victorian cottage, Soigné feels like a home, and the service matches the intimacy of the setting. The only employee other than Mr. Golden is his mother, Margie.

In May, mother and son alternated delivering courses to a dining room lined with art from Black Mississippi artists. Mr. Golden’s food features ingredients from around Jackson and the region, like crab tostadas with charred garlic aioli and local radishes draped in a tonnato sauce made with Gulf of Mexico tuna he smokes out back.

Mr. Golden draws on experiences cooking on both coasts and the Deep South. But there’s a reason his food doesn’t closely reflect what he ate growing up 75 miles north in Belzoni, where the farmed-catfish industry was a source of jobs for family members — and, in the chef’s opinion, too many meals.

“I told my mom, ‘I’m going to learn how to cook because I’m sick of cooking the food I’ve been eating my whole life,’” he said.

An advantage of tasting menus is that they enable thrift. Because they tend to require reservations and compel diners to choose and pay for their meals in advance, tasting menus allow chefs to estimate the ingredients purchased for each meal with precision. This reduces waste that is common at à la carte restaurants, which have to stock up on food that diners may not order.

Fixed menus also contain fewer dishes than conventional ones, making them possible to execute with fewer employees inside the small spaces that tend to command lower rents. “No one has a choice with our menu, and we don’t do substitutions,” said Amanda Shulman, the chef and owner of Her Place Supper Club, in Philadelphia, Pa. “From a chef’s perspective, it’s very streamlined and sustainable.”

Ms. Shulman in front of Her Place, which she opened in a former pizza joint in Philadelphia, Pa. The space is so small, she said she was at first reluctant to even call it a restaurant. Credit…Neal Santos for The New York Times

Ms. Shulman, 30, opened Her Place in a former pizza joint last summer, after watching five potential deals for more conventional restaurant spaces fall through. She was at first reluctant to even call it a restaurant. The original business plan she wrote was for a “picnic pop-up” selling prepared meals to-go.

She ultimately decided on a $75 tasting menu of dishes that are inventive but also well-suited to the casual, dinner-party vibe of the 24-seat restaurant. The menu, which changes weekly, has included stone fruit with whipped cheese and speck, lobster pain perdu and strawberry profiteroles.

The colloquial flavor of the food has its roots in the dinner parties Ms. Shulman used to host in her apartment, charging $35 a head. That’s how she discovered her true “voice,” she said, and she feels fortunate to be able to express it in a business that empowers her to, among other things, offer better work-life balance for her seven-person staff. Her Place is open for two nightly seatings, Tuesday through Friday, and for walk-ins only on Monday.

“If you don’t have to be open on Saturday, why would you?” Ms. Shulman asked. “It’s better for people who have friends they want to hang out with on weekends.”

The general manager, Julianna Bursack, waiting for Ms. Shulman to finish plating dishes at Her Place, which seats just 24.Credit…Neal Santos for The New York Times

Her Place shares qualities with Mosquito Supper Club, the New Orleans restaurant where food from the Cajun coast of Louisiana is served family style around communal tables. Beyond offering creative freedom, the tasting menu allows Melissa Martin, the restaurant’s chef and owner, to pay higher wages.

Similarly, at Juliet, in Somerville, Mass., employees are paid a minimum of $16 per hour — plus tips or service-charge revenue — and guaranteed a raise after a year on the job, said Joshua Levin, the restaurant’s co-owner. The tasting menu is what makes such benefits affordable, he said, even if it has occasionally confused diners who are surprised to find the restaurant in a former coffee shop.

“People show up dressed in a suit, because it’s a tasting menu,” Mr. Levin said. “It’s cute.” (Last week, Juliet opened in a new building next door to its original space, which Mr. Levin said will become a wine bar.)

Mosquito and Juliet both opened in the mid-2010s, following a path forged by stripped-down tasting-menu restaurants, like Dirt Candy, in New York City, and Schwa, in Chicago, that emerged in the decade before with inventive takes on the form.

Peter Cho and Sun Young Park inside Han Oak with their sons, Frankie, left, and Elliott. They opened the restaurant in Portland, Ore., in 2016, in the same space as their family’s apartment.Credit…Celeste Noche for The New York Times

When Peter Cho and Sun Young Park moved from New York City to Portland, Ore., in 2015, they were looking to create a family-friendly alternative to the grind of restaurant life as they knew it. With little money to spend, they took over a residential space and converted it into a restaurant, Han Oak, as well as their home.

The couple took inspiration from Beast, Naomi Pomeroy’s now-closed restaurant across town, as an example of a tasting menu offered in a casual setting. In the beginning, Han Oak was open only two nights a week. With the family’s apartment just a few steps from the kitchen, “we could literally parent while we worked” Mr. Cho said.

Han Oak’s $55, five-course menu of dumplings, noodles and Korean fried chicken attracted national acclaim. Its hours expanded to four nights a week, and the menu changed. The family moved into a different home around the start of the pandemic, which prompted them to temporarily close Han Oak.

Last year, Mr. Cho and Ms. Park opened Toki, in downtown Portland, with an à la carte menu filled with dishes road-tested at Han Oak. When Han Oak finally reopened in February, it did so with a new, hot-pot themed tasting menu that has already evolved.

“I see this as more of an event space where we can try new concepts,” Mr. Cho said of Han Oak. “With a tasting menu, we know we’re going to be serving a certain amount of people. It’s more like catering.”

Also in Portland, Vince Nguyen, 36, opened Berlu in 2019 after building a following with a weekly tasting menu pop-up at Langbaan, a well-regarded Thai restaurant. The shelter-in-place phase of the pandemic caused him to reimagine the tasting menu at his austere, six-table restaurant. What was a more European-based Pacific Northwest menu is now built from Vietnamese ingredients and dishes.

“I was already getting support from the Vietnamese community, even though I wasn’t featuring Vietnamese food,” Mr. Nguyen said. The tasting menu, he added, “really empowered me to embrace my heritage.”

Cured and blistered halibut belly, center, is one of the many Vietnam-inspired dishes at Berlu, the chef Vince Nguyen’s tasting-menu restaurant in Portland.Credit…Celeste Noche for The New York Times

While Mississippi is far from the creative ferment of the Pacific Northwest, Mr. Golden, of Southern Soigné, is working to stay relevant in a region where the audience for inventive, intimate restaurants is growing. Elvie’s, a polished new bistro several blocks away, offers an $80 tasting menu alongside its à la carte dinner menu.

Affordable tasting menus have cropped up at Vestige, in Ocean Springs, 170 miles south of Jackson. That’s about the same distance as New Orleans, where some of the most inspiring food is found in small, relatively new tasting menu restaurants like Mosquito Supper Club, Lengua Madre and Saint-Germain.

Last month, Mr. Golden received a liquor license, an important step in the restaurant’s evolution. While he now offers wine pairings, he still allows customers to bring their own bottles, as he has since the restaurant opened.

“The wine pairings make the price change,” he said, and he “doesn’t want to scare anybody off.”

What Is a Wine Bar, Anyway?

The Proustian Ideal of a Ham Sandwich