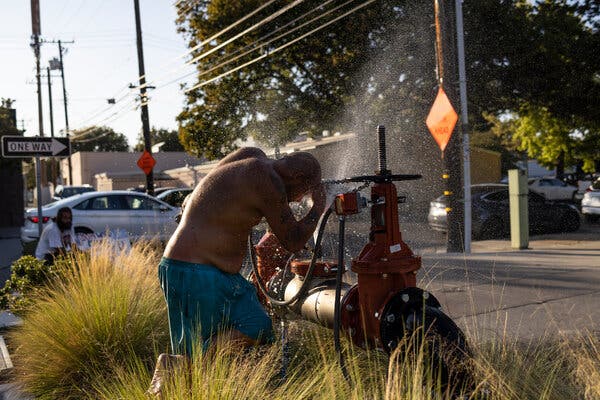 Andrew Alfaro opening a fire hydrant to cool down during the heat wave in Sacramento.Credit…Rachel Bujalski for The New York Times

The huge heat dome that has engulfed California for more than a week appears to be weakening, although meteorologists say triple-digit temperatures will remain with us for a couple more days. On Wednesday, residents were asked yet again to conserve power between 4 p.m. and 9 p.m., when the grid tends to get strained. Don’t be surprised if today brings yet another so-called flex alert.

At this point, though, some of us have questions, particularly since Tuesday, when state emergency officials sent a blaring alert to tens of millions of cellphones after the grid was brought to the brink of rolling blackouts amid record, Death Valley-style heat.

So I turned to my smart colleague Ivan Penn, who covers energy from our Los Angeles bureau. Here’s our conversation, edited for clarity and space.

Why is California going to such lengths to avoid rolling blackouts? Is it really that awful for the lights to temporarily go out?

Several years ago, during the Aliso Canyon natural gas storage plant leak, a meme circulated on social media asking something like: “Are Californians afraid of the dark?” After the 2000-01 energy crisis and the rolling blackouts that left many without power and helped cost Gov. Gray Davis his job, rotating power outages are something the state works hard to avoid.

There also are serious issues about safety that come with a loss of power, in particular for older adults and those with health concerns. The manager of the state grid has ordered rolling blackouts (which are different from the “public safety power shut-offs” used to prevent wildfires) just once in the last couple of decades.

Is our growing reliance on solar power raising the risk of blackouts?

Clean energy technologies like solar and wind power have initially been blamed during extreme events in California and Texas during the last two years, but those resources, along with storage, typically have played significant roles in supporting the electric grid. Bernadette Del Chiaro, the executive director of the California Solar and Storage Association, will tell you that the problem isn’t solar. It’s that California uses a lot of electricity in its hot summers, particularly in the evenings. But when the sun starts to set, solar supplies decline and we can’t store leftover solar power because we don’t have enough batteries.

One of the easiest ways for everyone to participate in conservation is to warn consumers that energy supply is potentially tight and couple it with urging them to use less power, like setting thermostats to 78 degrees or delaying electric vehicle charging until off-peak hours during a heat wave. But Elliot Mainzer, the president and chief executive of the California Independent System Operator, which manages the statewide electric grid, described Tuesday’s conditions as an “extraordinarily difficult day for the grid.”

Everything helps. But under those circumstances, some question whether issuing “flex alerts” days before the situation became truly dire may have allowed complacency to set in.

Is that why I got what sounded like a vibrating Amber Alert on my cellphone on Tuesday?

That alarm might have been a shock for the tens of millions of Californians who received it, but that was the point. Electricity demand had reached a critical level at which supplies had become perilously low. Electricity use had remained high despite the “flex alerts,” and the sweltering heat wasn’t quitting. But Mainzer and Gov. Gavin Newsom made it clear that neither of them plans to make those emergency texts a regular part of the state’s outreach. Overuse of that tool would have diminishing returns — people would stop taking it seriously and ignore it. The Times reporter Jill Cowan caught the governor outside a tech conference in Beverly Hills on Wednesday, and he bluntly told her, “I’m hoping we don’t have to do that again.”

I hate to ask, but should I rethink my electric car with all this stress on the grid?

President Biden refers to the period we are in as the “energy transition.” And like with any transition, this one comes with some uncomfortable challenges.

I spoke with Rob Gramlich, president of Grid Strategies, which aims to eliminate carbon dioxide emissions from the electric grid through use of clean energy. A former economic adviser at the Federal Energy Regulatory Commission, Gramlich noted that California is playing catch up in improving its electric equipment, and extreme heat waves only make it all the more challenging.

But he said that rather than ditch their zero-emission vehicles, if Californians want to keep power rates low and reach their carbon targets, the key is to develop ways to charge electric vehicles when power is cheap. During “flex alerts,” that’s before 4 p.m. or after 9 p.m., but when California isn’t in the middle of a record heat wave, it’s typically in the middle of the day when solar power is plentiful and at its peak.

One last question, Ivan. Inquiring minds want to know: What do you drive?

I have an almost four-year-old combustion engine car. But my next one will be electric.

The rest of the news

Mount Shasta’s south face and a lenticular cloud hanging over its summit.Credit…T.C. Worley for The New York Times

Tell us about your favorite places to visit in California. Email your suggestions to CAtoday@nytimes.com. We’ll be sharing more in upcoming editions of the newsletter.

Californians: Have growing concerns about climate change affected how you live your life? Have you made any changes? If so, we want to hear about them. (Are you driving less, eating differently or changing your job?)

Email us at CAToday@nytimes.com. Please include your name and the city you live in.

This is part of a live event that The Times is hosting in San Francisco on Oct. 12 examining our collective response to the climate challenge. Learn more.

And before you go, some good news

From a distance, Autumn McWilliams could be any mother out with her baby — a young woman pushing a stroller through downtown Los Angeles.

But the illusion shatters when you draw nearer and catch a glimpse of the creamy white feathers. Inside the stroller is a Pekin duck known as Cardi D.

McWilliams takes Cardi D everywhere: on the bus, the train, even to the dreaded DMV. In her first four months of life, she has become a comfort animal — an “emotional support duck” — for McWilliams, who has been homeless on and off for half her life.

Thanks for reading. We’ll be back tomorrow.

Soumya Karlamangla and Harrison Hill contributed to California Today. You can reach the team at CAtoday@nytimes.com.