Good morning. It’s Tuesday. Scroll down for trash talk with a reporter — that is, a Q. and A. about trash in the city. But first, is New York City in danger of a drought? 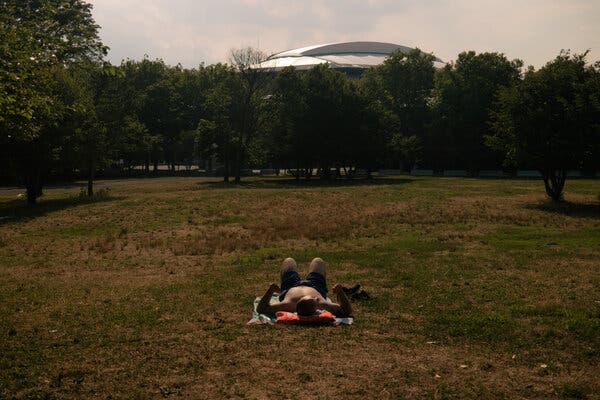 Credit…Jose A. Alvarado Jr. for The New York Times

Lawns have turned brownish, and trees have lost leaves — signs of dry weather. New York City’s reservoirs, which should be at about 89 percent of capacity, are at 81 percent. Is a drought in the forecast?

Maybe in the short term, but not like in the drought-stricken Southwest. And it probably won’t last into the fall, forecasters said.

The city’s Department of Environmental Protection said the city is not near drought watch or drought warning levels. And the long-range forecast is for above-average precipitation through October, as weather patterns send remnants of tropical storms toward the Northeast. The Atlantic hurricane season will be “above normal,” with as many as 20 named storms, 10 of which could develop into hurricanes, federal scientists said last week.

But right now, with there is “moderate drought” in parts of the city, as reported by the National Drought Mitigation Center, which tracks climate conditions. The center said last week that 45.5 percent of Manhattan was so dry it was in the “moderate drought” category, the second of five that range as high as “exceptional drought.” The rest of Manhattan was “abnormally dry,” the lowest category.

The city said that drought is less of a concern than it once was because conservation efforts since the 1990s have cut water use by a third, even though the population grew by about 1.5 million people in that time. The city is now using about 1 billion gallons a day, roughly 500 million gallons less than then. Low-flow toilets and shower heads have made a difference. So have timers on the spray showers on playgrounds.

But lawns and trees are hurting at the moment. “Our crab apple trees have dropped all their leaves,” said Adrian Benepe, the president of the Brooklyn Botanic Garden. “That’s one of the first trees to respond to drought.” He said the garden looks good “only because we’ve been watering like crazy.”

It will be mostly sunny in the mid-90s, with a chance of showers and thunderstorms starting in the afternoon. At night, it’s mostly cloudy with temps in the mid-70s.

In effect until Monday (Feast of the Assumption).

Living in the city

Trash talk with a reporter

New York City is experimenting with new trash receptacles and a social media campaign. They’re the city’s latest attempt to turn the corner in the long, losing war on trash. I turned to my colleague Dodai Stewart, who looked into ways to tackle trash, for an explanation.

So the best the Sanitation Department has to offer is — new bins? And TikTok videos?

I mean, the new containers are not a solution to everything. But they are a step in the right direction. Maybe only a baby step.

I definitely think that figuring out how to keep bags of trash off the sidewalk until they’re picked up is a good thing, and that’s the purpose of the containers. They also hide the trash bags — from rats and New Yorkers. People do absolutely find the containers attractive. The one I saw in Brooklyn had planters on the side with flowers blooming next to the hidden trash — the trash inside, the flowers outside. It was really attractive.

Do you have a sense of whether the containers are vulnerable to vandalism?

If they get overstuffed, the doors can start to bulge. If someone is trying to pry open the doors, that doesn’t help with leaking.

And the truth is, sometimes something looks like it’s leaking, but it’s stuff that was already in the street. It’s hard to determine the origin. I did not do chemical analysis. No swabbing, no samples, no Petri dishes. In New York, you never know if it’s the primordial ooze or yesterday’s milkshake.

Isn’t the problem density — so many people in so little space?

It’s a high-density city, and we don’t have things other cities have. We don’t have a lot of back alleys where garbage trucks can go to pick up trash. We have aging infrastructure, and it’s not uniform. Some streets are narrow and paved with cobblestones; some are wide boulevards. What works in one place doesn’t work a block over.

And there are cars on streets and alternate-side parking, but lots of times, people don’t move their cars, which leaves the curbs dirty because the street-cleaning machines have to swing around the one car that’s still parked on the block during street-cleaning time.

Not everyone is enthusiastic about the new containers.

There’s a lot of reuse that happens in New York. There’s a whole economy that happens just from leaving things on your stoop, maybe with a “free” sign on it. In other words, things you have decided are waste that someone else looks through and decides is not waste. There are New Yorkers who survive on redeeming the recycling that others don’t take in for refunds. People who make their income redeeming cans and bottles. That is their method of survival, so they will be affected by the containers, if they go citywide. We’ll see.

On the corner of Driggs Avenue and Humboldt Street in Greenpoint there is a little Polish deli. The man who works there has known me even before I knew me, yet I could not tell you his name.

My family shops at the deli for fresh cuts of Polish meat, bread, pickles, horseradish and other charcuterie accompaniments from the homeland.

When I was younger and still living in Queens, I would often join whichever parent was going to the deli, purely for selfish reasons.

Like clockwork, the deli man would give my parent change with one hand and give me a Polish treat, either Krowki or edible gum, with the other.

“And this for the little one,” he would say, extending his fist and opening his palm to reveal the treasured confection.

My father still goes to the deli whenever my family has a hankering, despite having crossed the Horace Harding Expressway to Long Island nearly two decades ago. Last July, while visiting, I joined him on one of his trips. Now fully an adult, I had not been to that intersection in many years.

From behind a counter packed with pickles, head cheese, kielbasa and rye bread, the deli man handed my father his change. With his other hand, he reached to a shelf above the register.

Bringing it down, he turned over and opened his fist to reveal three yellow Krowki.

Glad we could get together here. See you tomorrow. — J.B.

Melissa Guerrero and Ed Shanahan contributed to New York Today. You can reach the team at nytoday@nytimes.com.

Criminal Background Checks May Be Banned in N.Y.C. Housing Applications

New York’s Dilemma: Who Should Be Hospitalized Against Their Will?