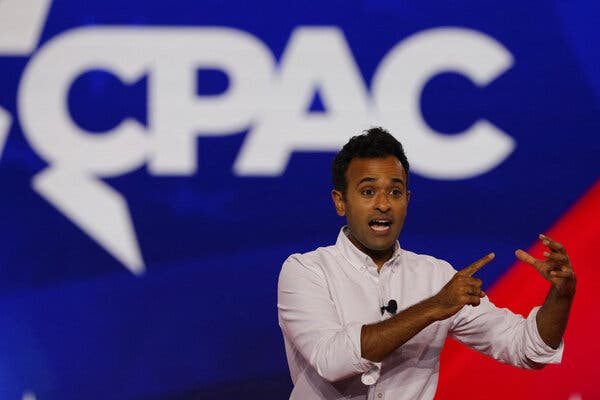 Apple and Disney face new pressure from the right

A conservative investor, with backing from Peter Thiel and Bill Ackman, has two new targets in his anti-E.S.G. campaign. Yesterday, Vivek Ramaswamy sent letters to the C.E.O.s of Apple and Disney, urging them to refrain from making political statements on behalf of their companies, or hiring decisions based on race, sex or political beliefs.

Ramaswamy has emerged as one of Wall Street’s most prominent critics of the environmental, social and governance investing movement. Earlier this year, the investor, who is the author of “Woke, Inc.,” launched Strive Asset Management, which he says will combat pressure on companies to consider liberal politics before bottom lines. Its first exchange-traded fund, which is focused on energy, launched last month and already has roughly $320 million in assets. Its ticker symbol, which echoes Ramaswamy’s prescription for the energy industry, is DRLL.

Strive’s second fund, the Strive 500 E.T.F., which invests in large public companies, launches today. Ramaswamy’s plan is to use the power of shareholder votes to refocus large companies on maximizing profit, a goal from which Ramaswamy says boardrooms have strayed. One of the first issues it’s tackling is hiring policies; Apple, Ramaswamy says, is a prime example of the problem.

Ramaswamy is urging Apple to halt its “racial equity audit” and to remove diversity considerations from its hiring and compensation policies. His letter hints that if Apple doesn’t change its policies, Strive will try to raise the issue at its next shareholder meeting. In his letter to Disney, Ramaswamy says the company has hurt its brand by speaking out against government policies that do not directly affect its business, namely Florida’s recent law that limits the discussion of sexuality and gender in the classroom. “We would be best served to have an honest debate about why we need E.S.G.,” Ramaswamy told DealBook. “You can make the argument that companies have a social responsibility that goes above and beyond profits, but to retrofit E.S.G. to say that it’s about long-term profit maximization, well, that glove doesn’t fit.”

It’s part of a growing debate over the influence of E.S.G. investors. Critics say the managers of such funds are limiting companies’ profits and ability to compete. E.S.G. proponents say looking at the long-term impact of corporate decisions on the environment and society might sacrifice short-term gains, but will lead to higher profits and more sustainable firms. In an essay this weekend, Martin Lipton, the prominent corporate attorney and founding partner of Wachtell, Lipton, Rosen & Katz, argued that companies have a legal responsibility to consider those longer-term questions. “We continue to believe it is essential that boards operate under a governance model that permits consideration of E.S.G. principles and sustainable investment strategies,” he wrote.

Chamath Palihapitiya winds down two of his SPACs. The financier said this morning that he would return their funds to investors, after failing to find suitable merger targets for either. Palihapitiya, who became a serial SPAC mogul during the pandemic, said he considers such funds “just one of many tools” to invest.

Supply-chain issues cost Ford dearly. Shares in the carmaker were down nearly 5 percent premarket after it said it would pay $1 billion more for parts this quarter. Ford blamed inflation and shortages.

New York City faces a fiscal crisis. City officials expect tax revenue — including from businesses and personal income taxes — to drop, leading to what New York State’s comptroller estimates will be a $10 billion budget shortfall in 2026. That could result in drastic reductions in city services, including garbage pickups and policing.

House Republicans reportedly consider investigating the U.S. Chamber of Commerce. G.O.P. lawmakers may begin inquiries into the lobbying group and some of its largest members if they retake the House this fall, according to The Intercept. Behind the drive: Republican opposition to the Chamber’s support for E.S.G.

The Biden administration’s bid to block a UnitedHealth deal is denied. A federal judge rejected the Justice Department’s lawsuit to prevent the health insurer from buying Change Healthcare. It was the latest setback for the administration’s more aggressive approach to antitrust enforcement.

Therabody, the maker of the Theragun hand-held massage device, a cult favorite among athletes, has raised $165 million, DealBook is first to report. The fund-raising round, which was led by the private equity firm North Castle Partners, comes as wellness businesses seek to regain their footing as the pandemic recedes.

During the height of the pandemic, money poured into home fitness. Sales of Peloton and Tonal workout equipment skyrocketed. While companies like Peloton are scaling back as demand falters, Therabody’s C.E.O., Benjamin Nazarian, says the pandemic highlighted a need to take care of your body. “Whether it’s a recession or not, your body is the most valuable thing you have in your life,” he said. Last year, Therabody’s revenues reached $396 million, up from $224 million in 2020.

Executives did not disclose the valuation of the latest fund-raising round. “The idea of having products for recovery in your home — we still think is a fairly young concept,” said Jon Canarick, a managing partner at North Castle, whose investments include Barry’s Bootcamp and HydroMassage.

Theragun will use the money to invest in digital content and acquisitions. It’s also announcing eight new products today, including smart goggles to help relieve facial tension and headaches as well as a new mini Theragun. The financing includes investment from a broad array of celebrities, including the comedian Kevin Hart’s Hartbeat Ventures and the model Karlie Kloss. “I had been a consumer and a superfan for a while,” Kloss told DealBook. She did not disclose the size of her investment.

Fending off copycats will be key. Therabody has settled with more than 15 companies over I.P. infringement. Still, it continues to see competitors offering massage guns cheaper than its $400 Theragun Elite. People “think that the low price point is going to take the entire market — and that is probably a very naïve understanding of I would say any consumer business,” Nazarian told DealBook. “Tell me one industry where there is no premium brand.”

A mine in Quebec could help solve the lithium shortage

A Canadian lithium mine owned by the Australian company Sayona Mining could produce the raw materials needed to advance the Biden administration’s climate goals and rival China’s dominance of the battery supply chain. If it opens on schedule early next year, it will be the second North American source of lithium. But the mine has had several owners, some of whom have filed for bankruptcy, and mining the materials needed for electric vehicles is an arduous process, writes The Times’s Jack Ewing.

The price of lithium has soared fivefold since mid-2021, pushing the cost of electric vehicles out of reach for many drivers. (Last year, the average new electric car in the U.S. cost about $66,000 — just a few thousand dollars less than the median household income.) Dozens of lithium mines are in various stages of development in North America, and Canada is determined to become a major source of raw materials and components for E.V.s. But most projects are years from production. Even if they raise the billions of dollars needed to get going, there is no guarantee they will yield enough lithium to meet the continent’s needs.

The stakes are rising for the auto industry. The Inflation Reduction Act, which was passed in August, provides incentives and subsidies for car buyers and automakers. But to qualify for the savings, which are worth a total of $10,000 or more per electric vehicle, battery makers must use raw materials from North America or a country with which the U.S. has a trade agreement. Whether there will be enough lithium to meet soaring demand for electric vehicles is another question. “Those of us in the industry are quite confident that lithium will be in short supply for the next decade,” said Keith Phillips, chief executive of Piedmont Lithium, which owns 25 percent of the Sayona’s Quebec project. He added, “Others are taking a contrarian view.”

“That was totally against what I was bargaining for. I wanted to be the chief executive officer in terms of leading the company and making public statements.”

A costly reality check for the metaverse

The rout in metaverse stocks is having a tangible effect on shareholders big and small. Exhibit A: Mark Zuckerberg, the founder of Meta, has seen his personal fortune shrink by $71 billion this year, according to the Bloomberg Billionaires Index.

Tech is one of the worst-performing sectors on the S&P 500 this year, and within that blur of red is the smaller subset of so-called metaverse stocks, or tech companies that are building virtual worlds for gaming, socializing and work. The investor Cathie Wood and Goldman Sachs were among those who heralded the metaverse as the biggest breakthrough in consumer tech since the introduction of the iPhone. They predicted the metaverse would be worth trillions by the end of the decade.

Zuckerberg changed his company’s name to Meta from Facebook last autumn, and has committed billions of dollars in investments to make his metaverse vision a reality. But investor appetite for tech companies embarking on ambitious, capital-intensive projects has sunk as interest rates soar. This has hurt metaverse stocks of all stripes. Exhibit B: The Metaverse E.T.F. is down 46.7 percent since its inception last year. Here are its top five holdings, benchmarked against the S&P 500:

The lousy share price performance isn’t just because of the metaverse. A slowing global economy, soaring energy prices and the bear market in crypto assets is also weighing down many of these stocks.

Thanks for reading! We’ll see you tomorrow.

We’d like your feedback. Please email thoughts and suggestions to dealbook@nytimes.com.