Good morning. It’s Wednesday. Today we’ll look at how rising apartment prices are pushing renters to expand where they look for units in New York City, and how they have given up searching Manhattan’s hottest neighborhoods. Also, we’ll look at the severe drought that has taken hold across the region. 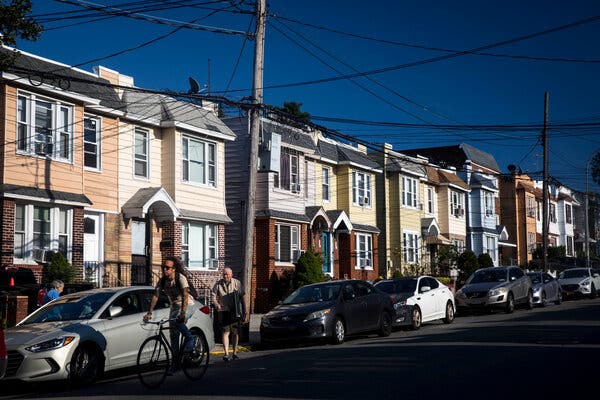 By one metric, the hottest neighborhood in New York City might be Maspeth, above, the 2.5-square-mile neighborhood in western Queens that, unlike a lot of the city, has many single-family, detached homes.

The real estate listings site StreetEasy found that out of all New York City’s neighborhoods, Maspeth saw the largest growth in apartment searches over the past year. The area’s relatively affordable apartments may be a main reason, StreetEasy said.

While New York City rental prices have boomed during the pandemic, prices in Maspeth have largely bucked that trend, staying somewhat stable not just the past two years but also over the last decade. According to StreetEasy, the median asking price for an apartment in New York City was $3,582 in July, a sharp increase from the lowest point during the pandemic, about $2,500 in the early months of 2021.

Yet, the median asking price in Maspeth was $2,400 per month in July, roughly in the same amount that apartments have been offered at over the past six years. Historically, there has been a significant reason for Maspeth’s affordability: it’s a bus ride away to the nearest subway station.

The other neighborhoods that rounded out the list of areas with the largest increase in search interest on StreetEasy are all relatively affordable compared with the rest of the city. They were Brownsville in Brooklyn; East Harlem in Manhattan; Sunset Park in Brooklyn; and East Flatbush in Brooklyn.

Moving on from Manhattan

It may be no surprise that the neighborhoods that saw the sharpest decrease in search interest were Manhattan areas long coveted by renters: West Village, East Village, Greenwich Village, the Lower East Side and SoHo. A majority of those neighborhoods have been unaffordable for most New Yorkers for years, never dipping below $3,000 per month in rent since 2010.

However, two of them, the East Village and the Lower East Side, were relatively affordable not long ago, according to StreetEasy data. Nowadays, both areas have median asking prices above $4,000 per month; but in the early months of 2021, they were below $3,000 a month, with prices in the East Village falling to $2,520 per month in February 2021, the lowest asking price there since March 2010.

It’s a sunny day near the mid-80s, New York. The evening is mostly clear, and temps will drop to the high 60s.

In effect until Monday (Labor Day).

A severe drought grips New York City and the region

Across the greater New York City region, many lawns are looking sad. They’re brown and crusty, with patches of green grass, if there’s any left, mixed in. In the city, leaves on trees are drooping and planted pots are shriveling up and dying. A drought has gripped the region.

All of New York City, along with counties in New Jersey and Connecticut, are experiencing drought conditions, according to the National Oceanic and Atmospheric Administration. Some areas are especially dry, such as Staten Island, which is experiencing a severe drought, the third highest level. Swathes of southern Brooklyn, from Bay Ridge to Marine Park, are also in a severe drought.

When my colleague James Barron wrote about the drought arriving in the region earlier this month, just 45.5 percent of Manhattan and 80 percent of Queens were experiencing a drought; it is now 100 percent in both areas.

The drought has emerged quickly, with nearly all of the region entering dry stages within the past month, according to NOAA. It is the first time since 2002 that Brooklyn has been in a severe drought; Staten Island experienced it more recently, in 2017.

In New Jersey, Union and Middlesex Counties are also in a severe drought after an especially dry July. The month was the 19th driest for Union County in the past 128 years, according to NOAA. And Union County has been hot lately, too, setting an August record on Tuesday with its 18th day this month of reaching at least 90 degrees at Newark Liberty International Airport. It could reach 90 there on Wednesday.

Earlier this month, New Jersey issued its first drought warning since 2016, urging residents to conserve water. Water reservoir levels have fallen across the state in recent months. Reservoirs that feed into New York City’s water system are also down, with storage capacity currently at about 73 percent; normal is 85 percent. (New York City residents use far less water today than a few decades ago, thanks to conservation efforts and the proliferation of low-flow toilets and showerheads.)

All of Connecticut is in a drought, with areas closest to New York City, such as Fairfield County, in a moderate drought. The rest of the state, toward Massachusetts and Rhode Island, is faring far worse, with parts of Windham County in an extreme drought, the second highest level.

The latest seasonal outlook by NOAA predicts that drought conditions will likely continue for much of the area over the next three months. Parts of Manhattan and the Bronx should improve.

It was 1959, and I was in the single, small elevator of a narrow, eight-story building at 18 East 50th Street, on my way to work at George Nelson & Associates, a design firm that occupied the sixth floor.

The elevator door closed, and six of us, men and women in the business attire of the day, stared up at the lighted numbers showing our destinations.

Suddenly, the elevator stopped between floors. Someone in the front pressed the button panel a few times, but nothing happened. A long minute or so passed.

Finally, a young woman who had just started as a receptionist in our office broke the silence.

“I guess we should all introduce ourselves,” she said cheerfully.

Everybody laughed and made eye contact. We were about to speak when the elevator started up again. There were no introductions, but I think we all exited with lighter hearts.

Glad we could get together here. Corey Kilgannon will be here tomorrow. — M.H.

Melissa Guerrero and Ed Shanahan contributed to New York Today. You can reach the team at nytoday@nytimes.com.

Wait … Is This Times Square?

Why Retailers Are Trying Extra Hard to Woo Holiday Shoppers

Landslide Kills at Least 14 at Funeral in Cameroon