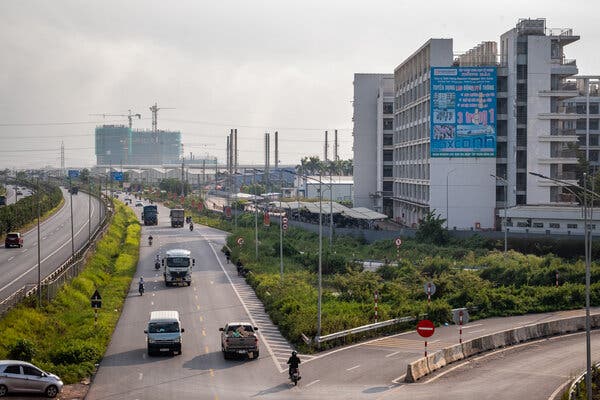 This month, Apple is expected to release the iPhone 14. Beyond rumors, little is known about what the crew from Cupertino, Calif., has planned for the company’s newest version of its nearly ubiquitous smartphone.

But there is one major change that most consumers will probably fail to notice: A small but growing number of the latest iPhones will be manufactured outside China, report The Times’s Daisuke Wakabayashi and Tripp Mickle. That’s a big change for Apple, and it is not alone.

After years of growing their Chinese operations, U.S. tech firms are starting to relocate production. The moves have been small so far. China is the world’s most dominant consumer electronic manufacturer, but there are growing signs of a great remapping of the global supply chain. Yesterday, China said that factory activity contracted in August.

Geopolitical tensions have driven the exit. Some companies began looking for options outside China during Donald Trump’s presidency, when tit-for-tat tariffs created risks of supply disruptions. Coronavirus-related shutdowns — Chengdu is the latest — raised further concerns. And China’s saber-rattling after Speaker Nancy Pelosi’s August visit to Taiwan has hastened the pace of American companies looking to add manufacturing capacity outside China.

Despite talk of reshoring, though, very few of the jobs appear headed for the U.S.

It will be hard for many companies to leave China completely. Google, for instance, is considering a foldable phone that will most likely need to be made in China because it requires advanced materials. More generally, over two decades, the tech industry has built up a low cost and formidable supply chain in China (at least before the pandemic). “We have a long way to go to have the whole supply chain diversified outside of China,” said Mehdi Hosseini, an analyst at Susquehanna International Group who focuses on the tech supply chain.

Vietnam appears to be the biggest beneficiary of the China exodus. Real estate brokers say they are busy showing properties to multinationals, even as the price of industrial land there has increased in the past few years. Foxconn, Apple’s largest contract manufacturer, is investing hundreds of millions of dollars expanding in Vietnam.

“The empire of manufacturing in China is being shaken,” said Lior Susan, the founder of Eclipse Venture Capital, which invests in hardware and manufacturing start-ups. “More and more capital is going to pull manufacturing out of China and find an alternative.”

House Republicans pledge to investigate Twitter whistle-blower’s claims. Representative Elise Stefanik, chair of the House Republican Conference, said caucus leaders would examine Peiter Zatko’s accusations that the company had misrepresented its security and privacy protections, according to a message to House Republicans reviewed by DealBook. It’s the latest front for Twitter as it defends itself against Zatko’s claims.

The U.N. accuses China of potential crimes against humanity over Xinjiang. Minutes before Michelle Bachelet was set to leave her role as the U.N. high commissioner for human rights, the organization released a report that said Beijing’s mass detention of Uyghur Muslims and others in the region was a serious human rights violation.

Disney weighs a new membership program. The media giant confirmed that it was considering a plan that could better link its Disney+ streaming service with other parts of its empire. Internally, some executives reportedly called the concept “Disney Prime,” likening it to Amazon’s Prime program, The Wall Street Journal reported.

Almost immediately after the court’s decision, the investing app Alinea, which is geared toward young adults, saw a new investment focus on companies that support reproductive health, said Alinea’s founders, Eve Halimi and Anam Lakhani. “When the news came out, one of the community members created a pro-abortion-rights playlist” — as in, a basket of stocks —“with companies that were supporting the cause,” Halimi told DealBook. “We saw a rush of activity.”

Reproductive health as a criteria. That first user-created playlist included companies that were taking a public stand to support abortion access, echoing public demand for businesses to weigh in on the issue.

Later, users asked for an updated version of the playlist, and the founders adopted that same inclusive standard. It now includes about 50 firms — including Levi’s, Apple, Pfizer and Tesla — that have taken a stand against the overturning of Roe v. Wade, or those that help pay for employees’ access to abortion services, or both.

Data shared with DealBook shows reproductive rights looming large in investment decisions. But location and gender matter. One month after the decision, Alinea had about 10,000 female users. Of those:

Reproductive rights at the corporate level are the “newest E.S.G. frontier,” according to Confluence Philanthropy, a network of investment managers, shareholder activists and others that convened a panel discussion on the matter in June. Expect a flurry of proxy proposals as activists plan to push deeper into the corporate arena. Previous efforts have failed, but E.S.G. experts are certainly telling companies to start preparing.

“We think it’s poised to be a game changer. It’s really going to open the floodgates for proxy fights.”

— Chris Couvelier, a managing director at the investment bank Lazard, on the impact of universal proxy cards, which go into effect today, for shareholder campaigns.

Yesterday, the president of McDonald’s U.S.A., Joe Erlinger, came out in full force against a new California bill that he says “should raise alarm bells across the country.” The measure, A.B. 257, could transform the way the service sector is regulated.

The bill, which the California Senate passed on Monday and which awaits Gov. Gavin Newsom’s signature, would create a state council to establish minimum pay and safety conditions. Supporters say it will protect fast-food workers from pay theft, discrimination and unsafe work environments.

Erlinger says the bill goes too far. His open letter is a sign of just how high the stakes are for McDonald’s and the restaurant industry, which fears similar legislation being adopted elsewhere.

“This is a clear example of picking ‘winners and’ losers,” said Erlinger, who called the legislation “the outcome of backroom politicking.” The bill excludes independent operators with fewer than 100 locations. But it applies to chains that are part of a larger company, like McDonald’s. The bill also provides an exemption for restaurants that produce bread “as a stand-alone menu item,” meaning it probably won’t extend to chains like Panera.

Erlinger isn’t against reform. He said that he wanted to see progress on worker pay and protections, and that new measures should be applied equally across the industry. “Shouldn’t all restaurant workers benefit?,” he asked.

Erlinger also worries about the inflationary effect of the bill. McDonald’s, for its part, raised the minimum wage at restaurants it owns last year by 10 percent to reach an average of $15 an hour by 2024. But its franchisees are free to set pay, and they have not all moved in tandem. Some franchisees “still focus too much on the cost side, and don’t see investment in people as a way actually to grow their cash flow over time,” the McDonald’s C.E.O. Chris Kempczinski told The Times last year.

A crypto mogul stares down the tax man

Michael Saylor became a hero to the cryptocurrency faithful in recent years for directing MicroStrategy, the software company he co-founded, to spend roughly $4 billion to buy Bitcoin. That move has looked disastrous as the price of Bitcoin has dropped below $20,000. Saylor and MicroStrategy face a new problem: tax charges.

Saylor is accused of evading $25 million in taxes owed to the District of Columbia, according to a lawsuit by Karl Racine, the district’s attorney general. Though Saylor has claimed to live in Virginia or Florida — states with little or no personal income taxes — he has actually lived in several properties around Washington, Racine claims. (As proof, the district points to Facebook posts by Saylor that reference a home in Washington.)

MicroStrategy is also named as a defendant. In his complaint, Racine accused the company of knowing that Saylor was evading D.C. taxes and of working with him to help hide that fact.

It’s a potentially big problem for Saylor and MicroStrategy, with Racine seeking what could amount to more than $100 million in unpaid taxes and penalties. That’s on top of a plunge in the value of MicroStrategy’s Bitcoin holdings amid the broader decline in the crypto market. The company’s shares have nearly halved over the past 12 months; Saylor recently stepped down as C.E.O.

We’d like your feedback! Please email thoughts and suggestions to dealbook@nytimes.com.

Biden to Address Threats to Democracy in Philadelphia Speech

Lea Michele Is Well Aware That the Pressure Is On

New York’s Dilemma: Who Should Be Hospitalized Against Their Will?