LYSYCHANSK, Ukraine — There was a mass grave that held 300 people, and I was standing at its edge. The chalky body bags were piled up in the pit, exposed. One moment before, I was a different person, someone who never knew how wind smelled after it passed over the dead on a pleasant summer afternoon.

In mid-June, those corpses were far from a complete count of the civilians killed by shelling in the area around the industrial city of Lysychansk over the previous two months. They were only “the ones who did not have anyone to bury them in a garden or a backyard,” a soldier said casually.

He lit a cigarette while we looked at the grave.

The smoke obscured the smell. 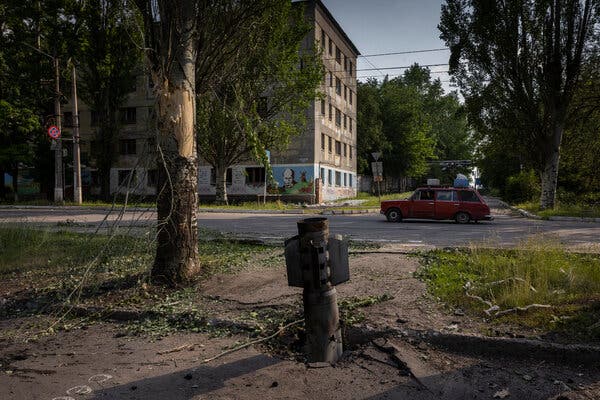 An unexploded rocket in Lysychansk, where the mass grave contained just some of the civilians killed by shelling in the area.Credit…Ivor Prickett for The New York Times

It was rare to get such a moment to slow down, observe and reflect while reporting from Ukraine’s eastern Donbas region. But that day, the Ukrainian soldiers were pleased after delivering packets of food and other goods to local civilians, so they offered to take reporters from The New York Times to another site that they said we should see: the mass grave.

After leaving the site, I naïvely thought the palpable presence of death in the air could not follow me home — over all of the roads and checkpoints separating the graves in the Donbas — to my loved ones in the western part of Ukraine.

I had returned to Kyiv, the capital, to the small apartment I had been renting, and was washing the smoke and dust of the front lines off my clothes when my best friend, Yulia, texted: She had lost her cousin, a soldier, fighting in the east.

I would soon have to stand over another grave.

People gathering at a municipal water pump in Sloviansk, a city near Lysychansk, in June.Credit…Ivor Prickett for The New York Times

It was an experience familiar to many Ukrainians. Five months after the full-scale Russian invasion began, the wars’ front lines mean little. Missile strikes and the news of death and casualties have blackened nearly every part of the country like poison.

Yulia’s cousin Serhiy was serving in an air mobile battalion around the city of Izium in the east. A few hours before he died, he sent his last message to his mother, Halyna: an emoji of a flower bouquet. Then he drove to the fight on the front line, where a Russian machine gun found him.

In Donbas, these tragedies are a backdrop to everyday existence, piling up in numbers that seem inconceivable even as they completely surround you, an inescapable reality that feels like the very air in your lungs.

Ukrainian police officers removing a man’s body from a home in Lysychansk in May.Credit…Finbarr O’Reilly for The New York Times

There is no catharsis for the people living in the frontline regions. Instead, they seem overwhelmed by the vastness of what is going on around them — as if it’s an existential threat too big for them to do anything about. So they wait numbly for what often seems the inevitable outcome, hypnotized by indecision, all while often forgetting they are directly in harm’s way.

It felt different in the west, away from the front. In the Donbas, almost every sudden odd noise was exactly what you suspected it to be: something lethal flying nearby, seeking out the living.

Our Coverage of the Russia-Ukraine War

In contrast, Kyiv was almost peaceful. With running water, gas, electricity and internet, it was far from the medieval conditions of a destroyed Lysychansk. People were playing Frisbee and walking dogs in the parks, devoid of the bodily stiffness and sense of dread that accompanies the threat of sudden death.

The grave of Serhiy Danylchuk, a Ukrainian soldier who was killed in eastern Ukraine, on Friday.Credit…Brendan Hoffman for The New York Times

The chain of midsummer missile strikes on cities far from the fighting in the east and south had only just started, turning the daily news of killed civilians into a nightmare: unsuspecting people — children among them — blasted apart or burned alive inside malls and medical centers in broad daylight. It left tight knots in our stomachs, but they hadn’t transformed yet into something almost genetic, a terror that would be passed on to the offspring by the survivors of this war.

Another nightmare, a private one, was contained in Serhiy’s coffin, closed to spare the family the sight of his wounds. It heralded the war’s arrival in Lishchn, a postage stamp of a village in northwest Ukraine where Yulia’s family came from. There was no thud of artillery or shriek from a missile, just the quiet hum of a funeral procession.

Because of soldiers like Serhiy fighting on the front line, the village residents still had their present and future, distorted by war, but protected. That’s why, on that Saturday morning, hundreds of them came to Serhiy’s parents’ yard to share the weight of their grief and take a long farewell walk with the family.

A couple outside their destroyed home in Sloviansk last month. Credit…Mauricio Lima for The New York Times

As the priest read prayers to the crowd, a flock of swallows maneuvered high above us — a set of peaceful black spots crossing the blue sky. One of them flew down and sat on a wire just above Serhiy’s mother, who was wailing by the coffin, placed on a pair of kitchen stools outside the house.

I’ve watched these ceremonies before on reporting duty, but from the emotionally safe distance of an outsider. But that day, there was Yulia, trembling in the wind. So I put my arm around my best friend, as close to a person’s raw pain as ever before.

Hours later, when the prayers ended, Halyna could not cry anymore. She just spoke quietly to her son, the way she used to over 30 years ago, when he was a newborn, his face in the cradle as tiny as the face in the funeral photograph of the smiling uniformed man holding a rocket launcher.

A Russian missile strike in Lviv, Ukraine, in May, part of a chain of attacks on cities far from the fighting in the east and south.Credit…Finbarr O’Reilly for The New York Times

Finally, we made the long walk to take Serhiy from the family’s yard to his grave.

Hundreds of people walked with Serhiy’s parents through his native village. There was a shop where he might have bought his first cigarettes, and a lake where he probably swam after ditching school with his friends.

Experiences from Serhiy’s life seemed to hide in every corner of their village. It made the walk excruciatingly long.

My steps that day fell in concert with the pain of one family — but just one. There are so many more in this war, which seems far from over.

People in a park in Kyiv, Ukraine’s capital, earlier this summer, where living conditions are far from the medieval ones of a destroyed Lysychansk. Credit…Mauricio Lima for The New York Times

It was hard to keep my thoughts from drifting back over the wheat fields of Donbas, to that yawning mass grave in Lysychansk.

There was no one present to mourn them there. After the Russians took over the city during the last days of June, the 300 body bags with name tags attached by Ukrainian soldiers were probably joined by many more, unnamed. But I figured that someone somewhere was quietly mourning each of them.

Now, as I’m writing this, others are walking those same tracks of remembrance and loss throughout Ukraine — over city alleys and wheat fields, over rubble and broken glass, through eastern steppes, western forests, liberated villages, trenches and bleeding cities at the edge of the front line.

Ahead, there will be a sunny afternoon for some of us to stop, take the hand of someone we love and let go of everything and everyone we lost to the war.

But how long is the walk to get there?

For the reporter back home in Kyiv, it was hard to keep her thoughts from drifting back over the wheat fields of Donbas, to that yawning mass grave in Lysychansk.Credit…Finbarr O’Reilly for The New York Times

‘Why Do I Have to Work Twice as Hard Just to Get Noticed?’