Jordan Peele has made only three feature films. But he seems to have packed a dozen movies’ worth of ideas into each.

Inspired by blockbuster filmmakers from Spielberg to Shyamalan, and pulling from sitcoms, ’80s songs and ’90s memorabilia, Peele mixes up decades of entertainment history into a thought-provoking pop-culture stew. And audiences have been happy to go along for the ride. “Get Out” (2017) earned $176 million domestically, according to Box Office Mojo, while “Us” (2019) took in $175 million.

Peele’s latest, “Nope,” a U.F.O. horror thriller (to try to boil it down into a category), has made more than $115 million since its July 22 opening. It has also become one of the most talked about and puzzled over movies of the season.

In a video chat, Peele shed light on some fan theories and hinted at the possibility of one or more stories to come from the “Nope” universe. Below are edited excerpts from the conversation.

This interview contains spoilers for “Nope.”

What was the genesis of the idea for “Nope”?

There was something about the notion of starting with “Close Encounters” but realizing we’re in “Jaws” that had an allure to it. The great tradition of flying-saucer movies is one that I admire and I haven’t seen enough attempts at it.

Steven Yeun in “Nope,” which Peele said sprang from “the notion of starting with ‘Close Encounters’ but realizing we’re in ‘Jaws.’”Credit…Universal Pictures

You have said that you wanted this film to promote the theatrical experience. Now that it has crossed the $100 million mark domestically, do you feel hopeful about the future of moviegoing?

Well, I felt like by the time the film came out, the industry was not in need of saving. But it’s good to point out that in 2020, when I was writing this film and everyone was saying that movie theaters as we know them might be gone — for me, the theatrical experience is everything. It’s my link to myself and other people in so many ways and has taught me to love film. So I just wanted to make a movie that people would have to go to the theater to see. In a way, if I was going to tell any story, I would want to tell something that was an escape into an immersive experience.

How did you decide to use IMAX cameras for it? I know they can be a challenge to shoot with since they are so bulky, can be noisy and are limited in the amount of footage they can capture before having to reload.

My characters are trying to capture evidence of a U.F.O. Then I, too, was on this mission, with my collaborators, with my cinematographer, Hoyte van Hoytema, with my production designer, Ruth De Jong. We were on this ship together, also trying to kind of capture this leviathan. So it had to be about rolling up our sleeves and letting it be hard and letting what’s hard about it be what makes it great.

And so one of the first questions I asked Hoyte was, “If I came to you and said, ‘There’s a U.F.O. in my backyard, you have one shot to capture this on film,’ what would you use?” And he said, in his charming Dutch accent, “I’d use my IMAX camera, Jordan, to be honest, because it has the best resolution.” 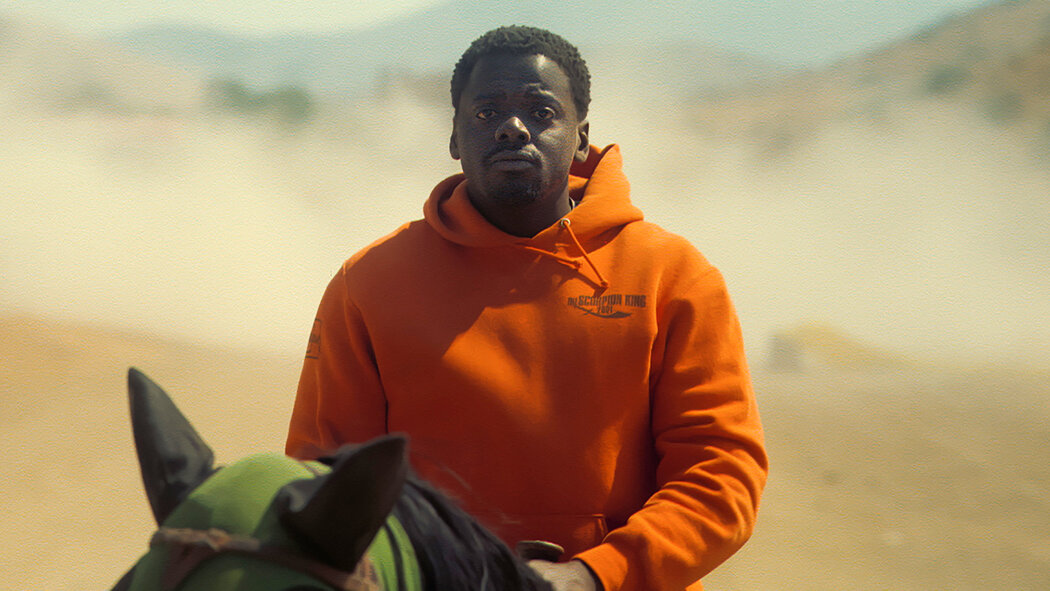 In the film, we realize that the U.F.O. we’ve been seeing is actually an alien itself. How did you decide how its interior would look once people are taken up?

There were many factors in the construction of what we call the Jean Jacket interior. And it went through several iterations. But I think the idea for me was getting across the most nightmarish environment possible, and involving the realization that being pulled up into this U.F.O. is not, in fact, an ascendance into a conversation or a negotiation with an alien species. It is a straight shot into digestion.

So I created something that was claustrophobic and yet felt like you’re so massively out of any sense of control, and in that state with a group of people. Part of the true fear of this thing is being not just a victim, but one of many victims who are all screaming together is, I feel, a particularly helpless feeling. So I built, essentially, a tunnel, a tract, that we were ushering people through. And then there’s a larger sense of the interior of that space. It’s much more like a theater in itself. And there’s something of a bouncy-castle-from-hell energy going on with the way it conducts wind and all.

OK, so getting into more specific narrative questions: In the sequence on the set of the TV show “Gordy’s Home!,” where the chimpanzee goes on a violent rampage and the character Jupiter is hiding and witnessing it, we see from his perspective one stray shoe standing upright without anything to support it. What is the meaning of that?

It’s the question I get the most, which kind of makes it the question I’m least inclined to answer with anything defining, at least at the moment.

I expect I’m probably not going to get more details than that.

Moving on, there’s some online chatter about a character who was cut from the film, listed as Nobody on IMDb. Could you talk about this character?

People are doing a lot of interesting detective work, is what’s going on.

They are. Analyzing frame grabs from trailers and the like.

The story of that character has yet to be told, I can tell you that. Which is another frustrating way of saying, I’m glad people are paying attention. I do think they will get more answers on some of these things in the future. We’re not over telling all of these stories.

There’s also speculation about whether OJ (Daniel Kaluuya) is alive at the end of the film, or if he is a vision that Emerald (Keke Palmer) is having. What is your take?

I think I made a film that has a very clear sequence of events as to what happened. I think it is very clear, and I will leave that at that.

When a story works, it’s because I’m tapping into a story within somebody. What I find interesting is, what did you first think? I know what I thought, but what you thought is what’s more important to me.

Restaurant Review: Evelia’s Tamales, a Sidewalk Standby, Comes in From the Streets

Mets-Dodgers: ‘You Play This Game to Face the Best’