Good morning. It’s Wednesday. Today we’ll look at why closing times in the city that never sleeps are earlier than they used to be. 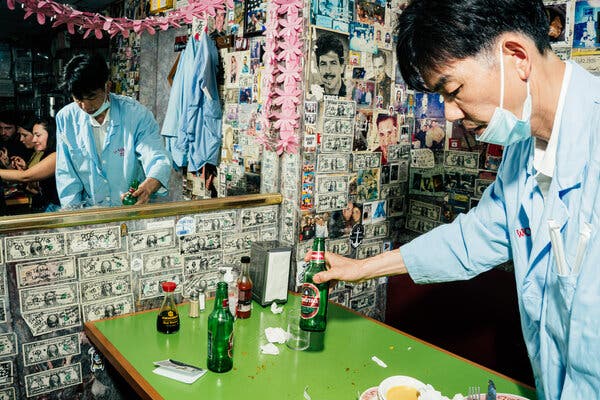 Cleaning up late at the restaurant Wo Hop in Manhattan’s Chinatown. Credit…Jutharat Pinyodoonyachet for The New York Times

New York has a reputation as the city that never sleeps, but as it emerges from the pandemic things seem to be happening earlier. The writer Rachel Sugar says 6 p.m. is the new 8 p.m. as restaurants fill up at times that were once unfashionable. Late night is also not as late as it used to be — and for people accustomed to a city that keeps going until dawn, earlier closing times can be disconcerting. My colleague Dodai Stewart stayed up late and found startled customers at what used to be all-night institutions. I asked her to explain.

I had friends in town and we went to see “Moulin Rouge.” When we got out, one of them wanted to eat something. He was on an L.A. time schedule because he had just come in from California and he was hungry. I said we should go to Chinatown because Wo Hop’s always open. And Wo Hop was closed.

A similar thing happened to another friend who was like, “I couldn’t believe it was closed at 11 o’clock.” This was at another place, not in Chinatown. Then I looked around and saw that other places had changed their hours.

The reasons vary. The pandemic disrupted closing times in general. There are different neighborhoods that are attracting late-night revelers now, including in Brooklyn. And some restaurant owners, it’s not worth it for them to stay open late — and they don’t want their staff going home very, very late. Those are some of the whys.

Let’s unpack them. When restaurant owners say it’s not worth it to stay open late and they don’t want their people going home late, what’s different from the wee small hours of the morning in 2018? Is it that there are fewer customers? Is it that there’s concern the subway is less safe?

One aspect that a restaurateur spoke directly to was anti-Asian hate crimes and wanting his staff home safely amid that uptick earlier in the year. But more broadly, because of the disruptions that New York experienced in the pandemic, late nights do feel different now. Not as many people are out in the same places as before.

People are not out as late in Midtown anymore, and they are not out late in Chinatown because things close down. But they’re definitely out late on the Lower East Side and in pockets of Brooklyn.

So in some ways, the former late-night scene in the center of the city has morphed and migrated elsewhere.

Is that because the population has shifted?

Yes. The city is so much more expensive now that younger people who are more prone to be out all night are not living in the city center, or even in Manhattan.

In terms of the city’s lagging recovery from the pandemic, has the work force shifted?

Many hotel and restaurant jobs have disappeared because fewer people are visiting the city or dining out. That said, restaurant owners say it’s tough to find help that wants to work the graveyard shift.

That doesn’t mean that everyone’s gone to bed and is asleep. It’s still the city that never sleeps. There are still people getting a pastrami sandwich at 3 a.m. and tacos at 4:30 a.m.

But it’s not just restaurants, and it’s not just the pandemic. Space Billiards, in K-Town on West 32nd Street, changed from a 24-hour operation to a 4 a.m. closing in 2017, well before the pandemic. Most nights now, it’s busy right up until the last possible minute.

How many games of eight ball did you play there?

I did not play, I just watched. But all the pool tables were booked in the early hours of the Sunday morning that I was there, and there was an hourlong wait to play.

I did not. It was crowded, and a young crowd. They were drinking. There was Champagne being presented with sparklers to someone who was having a birthday. It was very lively, very loud and very fun.

And the people singing sounded pretty good, too. I wondered if they had some ringers.

And then there are the stalwarts, like Katz’s Delicatessen on the Lower East Side. Why have they held on?

Actually, Katz’s is open around the clock only on the weekends, Friday and Saturday. They are responding to a crowd that is out late on the Lower East Side.

The bars close at 4 a.m. When I was at Katz’s at 3 a.m., a manager told me I was seeing the calm before the storm, and it was very busy at 3 a.m. There were a lot of pastrami sandwiches being served, matzo ball soup, a knish or two. It was at least half full with people waiting to order.

More people were coming in as I was leaving. Not everyone was drunk but some had possibly been, shall we say, overserved. And at Space Billiards, the word was that the people who come in latest are not the most polite. They’re drunk, they’re rude and that’s hard on staff.

Expect a sunny day with the highs in the low 80s. Tonight, cloudy with a slight chance of showers after midnight with the lows in the mid-60s.

In effect until Monday (Rosh Hashana).

Today is another day — and another gridlock alert day. Black-car motorcades will once again put on the largest show of diplomatic force on the streets since before the pandemic. It feels so familiar, so September-in-Manhattan.

“It’s the same, nothing new,” one driver, Francis Leckey, said after dropping off South Africa’s ambassador to the U.N. on Tuesday. “We have Ghana. We have Gabon. Over there is Pakistan. Those who are there are Canada. And over there is Namibia. And Botswana.”

An umbrella hangs from the hand of a young woman dressed in black. It drips onto the lap of a man seated to my left.

The woman doesn’t notice. She is too busy shaking her head at a student whose knapsack keeps brushing against her back.

The student, oblivious, guzzles down a coconut drink from a yellow can while looming over a woman in a ribbed tank top who is clutching a recycled bag holding what looks like more than 12 tall cans of beer. One is open and spills when she is not sipping from it.

The car empties out a bit at Chambers Street before someone breaks into a fit of coughing and sneezing.

I lean forward in my seat to get a glimpse.

Glad we could get together here. See you tomorrow. — J.B.

Francis Mateo and Ed Shanahan contributed to New York Today. You can reach the team at nytoday@nytimes.com.

Analysis: A Cornered Putin Is More Dangerous Than Ever