Throughout the country, and for the second time in less than a month, dozens of square miles of parched forest have been reduced to smoldering ashes by wildfires spreading rapidly amid a record drought and a new heat wave, once again forcing thousands of people to evacuate.

“Since June, our country has been facing exceptional fires,” Prime Minister Élisabeth Borne said on Thursday during a visit to Hostens, a small town in the southwestern region of Gironde, which has endured the worst of the recent blazes.

Ms. Borne announced a reinforcement of firefighting equipment and a set of new measures to “prepare for events that we know are also linked to climate change.”

The wildfires, which have torn through several regions near the Atlantic coast and parts of the south, have resulted in a tragic repetition of the scenes observed last month, when France was first engulfed by extreme blazes. Fire trucks raced back and forth under black-and-orange skies, as water-dropping planes flew overhead. Residents frantically left their homes, dark smoke billowing in the background.

But the havoc caused by the wildfires in France is just the latest consequence of a series of heat waves that has been scorching Europe this summer, highlighting how vulnerable countries in the West are to the new reality of extreme weather as it challenges cities’ climate change mitigation plans and plagues entire regions with water shortages. 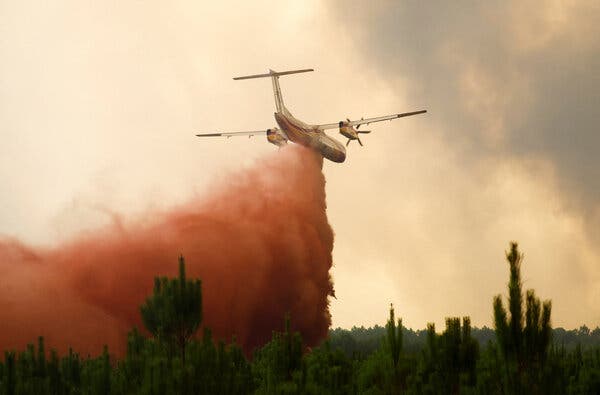 A plane dropped flame retardant to help extinguish a fire in Belin-Béliet, in southwestern France, on Wednesday.Credit…Stephane Mahe/Reuters

Several areas in France and Spain are under heat alerts, with parts of both countries expected to approach or exceed temperatures of around 38 degrees Celsius, or 100 degrees Fahrenheit, in the next few days. In Britain, the country’s National Weather Service issued an extreme heat warning for much of the southern half of England and parts of Wales through Sunday, noting that high temperatures could disrupt travel and raise the risk of heat-related illnesses for vulnerable populations.

While scientists say that tying a single heat wave to climate change requires analysis, there is little doubt that heat waves around the world are becoming hotter, more frequent and longer lasting. They have especially contributed to the intensity of fires by making vegetation drier and more likely to ignite.

The wine-growing region of Gironde is a case in point. There, a wildfire that had gutted 54 square miles of woodland near the town of Landiras in mid-July reignited on Tuesday, consuming an additional 26 square miles of bushes and forest.

Martin Guespereau, an official for the Gironde region, said the presence of peat deep in the earth had allowed the fire to continue smoldering underground — and to go undetected — until the flames flared up again because of the heat and the dry air.

“The fire of July had in fact not stopped,” Mr. Guespereau told reporters on Wednesday. “It had gone underground.”

Grégory Allione, the president of France’s National Federation of Firefighters, said the fire was as intense and rapid as last month. But, he added, “we are even worse off now than we were in mid-July” because a month of drought and heat has contributed to making the flora even more vulnerable to fire. He said the risk of fires would continue through the fall.

In addition to the exceptional climate conditions, Ms. Borne said on Thursday that the resurgence of some fires in the south was also possibly the result of arson.

As 1,100 firefighters were dispatched to battle the resurgent fire near Landiras, regional authorities announced the closure of a major stretch of highway between Bordeaux and Bayonne and said that 8,000 people had already vacated their homes, which were threatened by flames and smoke. Although there are no known injuries, 16 houses were destroyed near the town of Belin-Béliet.

“Prepare your papers, the animals you can take with you, some belongings,” Belin-Béliet’s local authorities wrote in a message posted on Facebook on Wednesday, announcing the evacuation of the northern part of the town.

Gérald Darmanin, France’s interior minister, said that over 10,000 firefighters were mobilized across the country to battle the fires that have kept lighting up for weeks. During a visit Wednesday to the fire-battered town of Mostuéjouls, north of the Mediterranean city of Montpellier, he acknowledged that they were “getting to a point of exhaustion” and called on companies to make employees who are enlisted as volunteer firefighters available. About 80 percent of France’s 250,000 firefighters are volunteers.

Mr. Darmanin said that Sweden and Italy would send firefighting equipment to France to help. And on Thursday, President Emmanuel Macron wrote on Twitter that five more European nations, including Germany and Greece, would also aid French wildfire efforts.

The European Forest Fire Information System reported that, so far in France this year, the surface of woodland consumed by flames is nearly six times as much as the full-year average for 2006 to 2021.

But beyond the ravages on nature, the heat waves have also had concrete consequences for European residents. In France, water restrictions due to what the authorities called “the most severe” drought ever experienced are in place in almost all of the country’s regions.

And a recent report from the Italian health ministry said that “the high temperatures and heat waves that affected our country in June and in the first two weeks of July were associated with an increase in mortality.”

“It’s a real slap in the face,” said Mr. Allione, of the firefighter federation. “Experts were telling us that these kind of events would occur between 2030 and 2050,” he said. “Today, it’s 2022. Almost a decade earlier.”

A Bigger Canvas for Jayson Musson Includes Puppets and Picasso

China Stems Wave of Protest, but Ripples of Resistance Remain