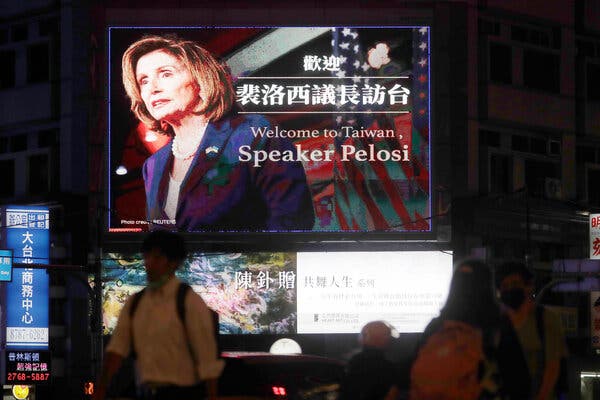 Nancy Pelosi’s visit to Taiwan could provoke China at a time when tensions with the U.S. are already high.Credit…Chiang Ying-Ying/Associated Press

In what is likely to be considered an affront in China, the U.S. House speaker is also likely to hold discussions with a number of human rights leaders this afternoon, before she departs. She said her visit to the self-governed island was a sign of the United States’ “unwavering commitment” to supporting its democracy.

The high-profile meetings set the stage for further tensions with China, which claims Taiwan as its territory. Shortly after Pelosi landed, Chinese diplomats said that her trip “seriously undermines” Beijing’s sovereignty, keeping up a growing drumbeat of anger in China toward the U.S.

And China’s military announced live-fire drills that appear to infringe on Taiwan’s territorial waters. A state news agency warned ships and aircraft away for “safety reasons.” Here are live updates.

Background: Pelosi, long a critic of China, is the highest-level U.S. official to visit the island since 1997. Tsai, Taiwan’s president, has vowed to defend its sovereignty.

Analysis: American officials said Pelosi’s visit could lead to more aggressive military posturing from China: its leader, Xi Jinping, has made it clear that unifying Taiwan with China is a primary goal.

The Biden administration announced a major new round of sanctions on Russian entities yesterday, including dozens of companies, oligarchs close to the Kremlin and technology institutions with ties to the military.

They also target a woman believed to be Vladimir Putin’s romantic partner: Alina Kabaeva, a former Olympic gymnast and a member of the Russian Duma.

The move blocks Kabaeva from access to any assets in the U.S. or conducting transactions with Americans, and it denies her a visa to enter the country. She is already under sanctions imposed by the E.U. and Britain.

And the move follows news of the expansion of U.S. aid to Ukraine. On Monday, the U.S. announced that it would send another $550 million in arms to Ukraine, bringing the American investment in the war effort to over $8 billion.

Our Coverage of the Russia-Ukraine War

Toll: At least 140,000 residential buildings in Ukraine have been destroyed or damaged, leaving more than 3.5 million people homeless. Civilians are stockpiling firewood and coal in preparation for winter.

Rights: Volodymyr Zelensky, Ukraine’s president, raised the prospect of “civil partnerships” yesterday. The war is a catalyst: L.G.B.T.Q. soldiers are fighting for their country, but their partners lack legal rights.

At sea: Sailors usually don’t usually discuss politics. The war is testing that norm for Ukrainian and Russian crew members on commercial vessels.

“He’s not the kind of person who gives up and goes away to live a quiet life in some nice house in the country,” a biographer of Boris Johnson said.Credit…Carl Court/Getty Images

What’s next for Boris Johnson?

Boris Johnson, the British prime minister, is set to leave office in September. But few expect him to step out of the spotlight — or abandon the prospect of one day regaining his position.

Less than three weeks after he announced his resignation amid a succession of scandals, rumors have already started swirling about a possible comeback. Recently, he posed in a fighter jet, then at a military base where he hurled a hand grenade, used a machine gun and held a rocket launcher during an exercise with Ukrainian troops.

And at his final appearance in Parliament as prime minister, Johnson’s verdict on his three tumultuous years in Downing Street was “mission largely accomplished — for now,” before he signed off with words from a “Terminator” movie: “Hasta la vista, baby.”

What’s next: Either Liz Truss, the foreign secretary, or Rishi Sunak, the former chancellor of the Exchequer, will take over. Johnson’s allies expect him to try to stay in Parliament to defend his legacy and key policy initiatives.

The Killing of al-Zawahri

As Libya again tips toward chaos, there’s little room for reconciliation. One town, Tarhuna, is struggling to find justice after the reign of a murderous band of brothers. But residents can’t even find the bodies of their relatives.

“When you say to me, ‘make peace,’ how can I make peace with someone with blood on his hands?” one woman asked. “How can I shake his hand?”

Almost every object in Hebrew has a gender: A table is masculine; a door is feminine. In recent years, some Israelis have been pushing to modify the language, and even the alphabet, to deal with what they see as its inherent biases.

One snarl: Hebrew lacks gender-neutral pronouns. People once reverted to the masculine plural to refer to a mixed-gender crowd. Some have begun using both the masculine and feminine forms of each verb and pronoun, along with corresponding adjectives — or just using the feminine form.

Critics call that cumbersome, needless tinkering: “I’m against clumsiness,” a journalist said. Some ultraconservative Jews oppose the new focus on equality on principle.

And Hebrew is more than just the official language of the Jewish state: It’s a binding marker of identity. The modern form has roots in biblical times. But it has retained the grammatical norms of ancient patriarchies.

Harissa and miso make for a comforting, carbonara-esque pasta.

What to Listen to

Check out these six podcasts about political scandals.

Have you given up on heels? Our fashion critic offers suggestions for formal flats.

And here are today’s Wordle and Spelling Bee.

You can find all our puzzles here.

That’s it for today’s briefing. Thanks for joining me. — Amelia

P.S. Matt Purdy has been named editor at large. In the new leadership position, he will continue to shape our most ambitious enterprise and investigative work.

The latest episode of “The Daily” is on the killing of Ayman al-Zawahri.

You can reach Amelia and the team at briefing@nytimes.com.

China Stems Wave of Protest, but Ripples of Resistance Remain